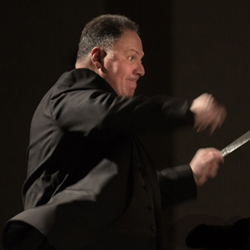 Dr. Gilbert Corella has been with the Loudoun Symphonic Winds since 1999, conducting more than 200 performances.

He began his musical career as a tubist with the United States Air Force Band. As a member of the Ceremonial Brass, he participated in a broad spectrum of ceremonies, ranging from State arrivals at the White House to full honors funerals at Arlington National Cemetery. His duties expanded as he became a drum major, performed as a soloist and conducted other components of the Air Force Band.

During his career, he moved into an administrative role as the Director of the Air Force Band’s Chamber Series program. His role with The USAF Band continued to expand when he accepted duties as a public affairs specialist and later becoming the Director of Special Events. With these responsibilities, he managed radio and television productions and represented the Air Force at major music conferences throughout the U.S. A strong believer in effective communication, he fostered partnerships with civilian and other military organizations, promoting the Air Force’s mission to inspire national pride. He retired in 2010 after serving 25 years.

In his civilian capacity, Dr. Corella began an instrumental ensemble program at what was then Charles County Community College (today the College of Southern Maryland). He also served as the Tuba/Euphonium Professor at George Washington University (Washington, D.C.) from 1999-2019 and has been the Music Director for Loudoun Symphonic Winds since 1999.

An advocate for music education, Dr. Corella founded the Serapis Foundation in 2003. Its mission is to educate and stimulate awareness on the diversity of musical expression. The foundation serves as a vehicle to recruit professional musicians to inspire future generations, targeting the diverse and economically challenged.

He has recorded on several compact discs, including The Bear (Unnatural Ax); Side by Side, A Klezmer Service, National Taptoe, and Tower Music.

He may be contacted at .